Pretty much since Kalena was born I’ve been hoping she’d find a lovey. Some sort of comfort object that would help her sleep or keep her happy in the car– that sort of thing. She’s had blankets and stuffed animals and all that, but nothing that she was particularly attached to. I’d pretty much given up on the whole idea when she finally found one. It’s a stuffed tiger I got when I was in high school so it’s probably about 10 years old. The only problem now? It’s as big as she is! 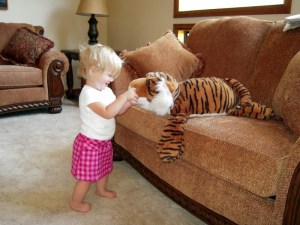 Also, it’s heavy. The thing probably weighs 10 lbs. Most likely because the paws are all filled with sand. But the combination of Big + Heavy means Kalena can’t carry it around herself. Instead, she just points to it or grabs the tail and hands it to me so I can carry it. It’s cute how much she loves it though. She’ll hug it or give it kisses and sometimes she’ll stop playing and walk over and pet it. We’ll just have to be careful to never lose it, because I’m guessing it would be hard to replace.