Will is rolling over these days.  He did it the first time just before 4 months, and he does it regularly now, but still not a whole bunch.  That’s it as far as getting mobile.

Kalena, at 5 months, was rolling herself all around, could push herself in a sort of backward crawl, and was *almost* crawling for real.  She wanted to get INTO stuff.  Will doesn’t so much care about getting into stuff.  What he wants is company.  He wants to be smiled at and talked to and held ALL THE TIME.  Luckily, (for Will AND for me) Kalena is often right there ready to help with the entertaining. 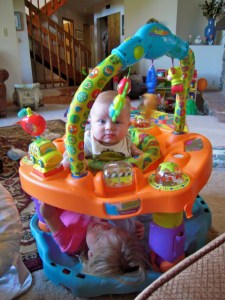 Alright, maybe she doesn’t always understand the *best* way to entertain him, but at least she tries.

2 thoughts on “Siblings, they’re good to have around.”