We had our first trip to the doctor for an injury today.  Kalena shut Will’s finger in the door.  Well, slammed it in the door.  Which cut the tip of his ring finger off.  Yes. OFF.

I always told Brian that any time one of our kids had an injury involving lots of blood I’d have to call him to come deal with it.  I held out hope that I was wrong, that if such a crisis arose I would pull myself together and deal with it.  NOPE.  When I realized how much blood there was today the FIRST thing I did was call Brian.  (Okay, right after I stuck a clean washcloth on it.)  Then I sat on the floor with the washcloth pressed against the wound and tried not to pass out.  I couldn’t even look at it.  In fact, I had leave the room at the pediatrician after all the talk about his finger, and how the tip was GONE.  And then I almost passed out in the hallway on the way out.  (Yes, for real.  I tend to get a little lightheaded.)

I feel horrible about it all.  I mean, I know there’s nothing I could have done.  It’s not like he fell down stairs I left un-gated, or cut himself on scissors I left within reach.  You pretty much can’t avoid having doors in the house.  And, as many times as I’ve lectured her, apparently I can’t avoid Kalena slamming them.  But still, I feel AWFUL.  Seriously awful.  And not just about the finger either (which, by the way, the doctor assured us will pretty much grow back.  No, they didn’t reattach the tip, even though Brian found it and brought it.) but about how I couldn’t deal with it.  Brian missed 4 hours of work because I can’t handle blood.  He’s the one that looked at how bad it was, he found the finger tip and wrapped it up properly, he held Will while various doctors and nurses checked him out.  I sat with Kalena in the waiting room, and then sat at home while she napped and Brian moved on to another doctor.  I felt completely useless. 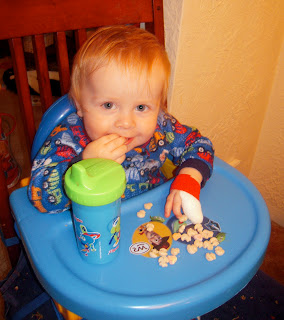 Nothing like a finger getting chopped off to make me feel good about my parenting abilities.