If you’ve read my Finding Out post, you know that Daniel’s diagnosis was a surprise. We opted not to do prenatal testing (for any of my pregnancies) for a couple big reasons.

Second: This is probably a bigger reason than the first- we wouldn’t have terminated the pregnancy.

So the question a couple people have asked since he was born is: Do I wish I had done prenatal testing so that I could have prepared for this? And having had a chance to think about it (a lot) my answer is no. If we had gotten this diagnosis before he was born I would have wondered about false positives. I would have worried about when to tell people. I don’t know that it would have felt real.

Getting the diagnosis after he was born was certainly a lot to take in. But Brian and I both manage pretty well with changes that come our way. I think if we had gotten the diagnosis before he was born, that’s all I would have thought about. Once Daniel was here though, HE was what mattered. Yes, he has Down syndrome. He also has a lot of hair, and big feet, and blue eyes. He is soft and tiny, just like our other babies were. Daniel is a baby, not a diagnosis, and I thinking getting a prenatal diagnosis would have made that harder for me to see. 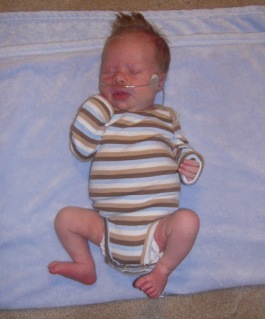 So no, I wouldn’t have done things differently. Besides, now that he’s here it’s impossible to imagine not wanting him, not having him, not loving him.