On Wednesday, Brian and I are taking Daniel up to the Sie Center for Down Syndrome in Denver. We’re scheduled to meet with a team of therapists who’ll assess Daniel, as well as with a geneticist. I’m not sure he’ll be able to tell us more than we already know, but maybe! The Sie Center is specifically for children (up to age 21) with Down syndrome (as you may have gathered from the name.) It’s comprehensive care, so it’s not just for kids who have medical issues associated with Down syndrome. And apparently it’s the only clinic like this in the country. That’s what they tell me anyway.

Anyway, I’m very interested to see what they have to tell us. And, as always, I’ll keep you updated. 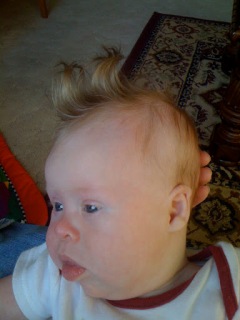 Daniel’s mostly excited to show off his awesome hair.