Just before Halloween in 2010 I needed a costume for Will. I had a Tigger costume for Kalena, but nothing for Will, so I ran down to Old Navy to check out what they had. I’d gotten Kalena’s costume there the year before, and we’d been happy with it. (Warm enough for Halloween in Colorado, and very cute.) Anyway, they had a few choices and it was close enough to Halloween that they were on sale even! I picked out the dragon, bought it in size 12-24 months (even though Will was not quite in 12 month size yet) and brought it home.

He wore it to a trick-or-treat event at a local school. 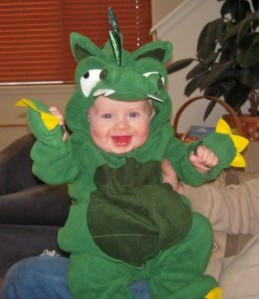 And then to my friend’s Halloween party. Then we put it away for awhile, because it was a little big. 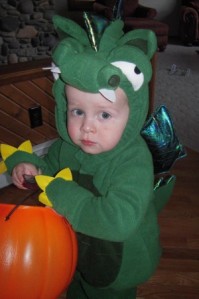 Now he wears it for all kinds of important things. Like tea parties.

I don’t know how he can stand to wear it in the 100 degree heat, but he does. Maybe this Halloween we’ll get him something new. Or maybe he’ll just want to wear this one again.

4 thoughts on “Getting our money’s worth”