I mentioned the other day that we scheduled Daniel for an appointment to get tubes. Well, that appointment was today! The plan was that he would be put under anesthesia, they would check his ears to see if he needed tubes, insert tubes if he did, and then run an ABR. We had a check in time of 6 am, which I might complain about, but he couldn’t eat after midnight so the earlier the better! Surgery actually started at 7:30. Here he is, waiting for the doctor to come get him. 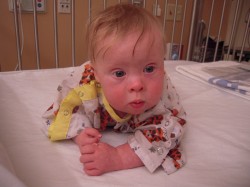 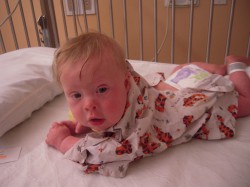 The tiny hospital gown had little tigers on it!

Anyway. They put him under, checked his ears and found that he definitely, absolutely, FOR SURE needed tubes. His little ears were so infected and inflamed that they skipped the hearing screening altogether. The doctor told me in the post surgery consult that he guessed Daniel’s eustachian tubes have never been open. So now I feel a little bad that we didn’t do this sooner. But not too bad, because they didn’t recommend it before! The whole thing went well, and the actual surgery was the short part. We spent WAY more time in pre and post op. He did well with the anesthesia, and he seemed fine (if a little sleepy) the rest of the day.  We have some steroid drops for his ears which hopefully gets them cleared up, otherwise it’s on to oral steroids and antibiotics. He has his follow up on the 28th, so I’ll report back then!