A while back I participated in a CDP exchange, and in one of the boxes my lovely friend Tara sent a dinosaur excavation kit. It looked like something the kids would enjoy, so before I headed to Kirsta’s I picked up a couple more so all the (older, dinosaur obsessed) kids could do one. I was a smidge worried, since the recommended age on the package is 8, and the oldest of the kids isn’t 5 yet, but I hoped dino enthusiasm would win out, and IT DID. The kids LOVED them! Especially Patrick, who insisted on basically no help AND put the whole thing together by himself. (I put my kids’ dinosaurs together while the kids were napping.) I was also a little worried about the mess, but it ended up not being too bad.

Everybody’s ready with their “dirt” and tools and giant bibs made of dish towels.

I’m not sure how Will managed to get anything done with his finger in his mouth. (He did actually require the most help.) 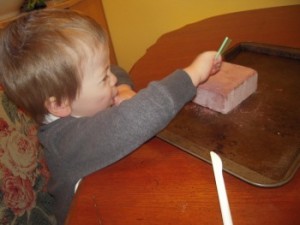 Patrick is loving it. Kalena is…I don’t even know.

Eli’s bib ended up as more of a cape. Also, he wanted no help, but wasn’t nearly as dedicated as Patrick, so he was the only one who didn’t finish.

And showing off the finished products! I should have taken a picture of all the bones (12 pieces total) so y’all could be suitably impressed that Patrick (who’ll be five next week) put it together BY HIMSELF. In fact, at some point I looked at his and realized that, despite reading the instructions, *I* was doing it wrong. That kid knows more about dinosaurs than anyone else I know.

Anyway, highly recommend those kits for any dino loving kids out there.

One thought on “Digging dinos”