Daniel had his one year check up Wednesday morning. It was good and bad.

Also good: we had his eyes rechecked on Monday because his tear ducts were blocked at 6 months, and she wanted to do some surgery to clear them if they were still blocked at a year. But! Not blocked! (She wasn’t *completely* happy with how they looked, but happy enough to leave them alone for another 6 months at which point he’ll need his vision checked again anyway.)

Okay, the bad isn’t so bad, it’s just…answering the 12 month questionnaire was a reality check. Before I elaborate, let me say that Daniel’s progress has been great. His therapist is pleased, we’re happy and so is his pediatrician. He makes progress every week. It’s visible  progress and that is FABULOUS. However. Going through 30 “can your child/does your child do this” type questions and only being able to say yes to one? Not my favorite. (The one he does do? Pushes his arm through a sleeve when I get him dressed.)

Obviously we know he’s delayed. I mean, he’s a year old and he doesn’t even crawl on his hands and knees yet. THIS IS EXPECTED. Still, to read through all those developmental questions and mark No. No. No. Was hard. ON THE OTHER HAND, part of me wants to carry this around and show it to people. Because I get people who I’m sure mean to be encouraging saying things like, “He doesn’t even seem delayed!” or “He seems totally fine!” And the reality is that he IS delayed. The reality is that he doesn’t say any words. He doesn’t even make any consonant noises. He doesn’t use a pincer grasp. At all. He can’t get into standing by himself. He can’t sit down from standing. Or cruise on furniture. Or walk, even holding someone’s hands. He is just barely starting to get into a sitting position without help. And all this is after almost A YEAR of physical/occupational therapy.

I don’t want to come across as being disappointed in where he is. I’m not! It’s just that Daniel’s world is far removed from most one-year-olds, and this was a stark reminder of that.

Anyway, let’s end on a happy note shall we? A picture of smiling, happy, wonderful baby Daniel. 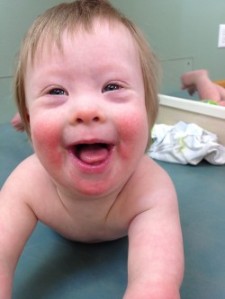 (At the doctor, before the shots.)

P.S. The doctor printed out the 9 month questionnaire for me to fill out instead. (Her suggestion.) We’ll continue do that (use the one from the previous visit) at his next visits.

16 thoughts on “The one year medical stuff”