Today was Daniel’s surgery for ear tubes. I did the “listen to his breathing after he falls asleep” for several days and never heard more than a little light snoring, so we opted to wait on the tonsillectomy/adenoidectomy. This meant surgery this morning was SUPER quick. They didn’t even have to give him an IV. The anesthesiologist warned me that kids wake up cranky after being under, but afterward the nurse told me he was just happy as a clam when he woke up. She said she’d never seen a kid wake up so happy. That’s my Daniel! His ears aren’t infected so we don’t have to do anything else for now, just a follow up hearing test at the end of the month. Another nurse did make it a point to tell me his tonsils are “quite large” but I already know that. It’s not as if I think we can avoid removing them EVER. I just don’t want to do it right now. 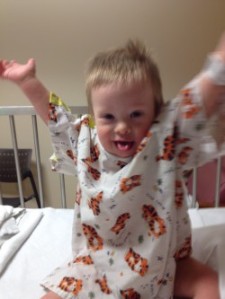 Obviously I needed to know he was “So big!” in his gown.