Alright, Halloween post time. We did most of our Halloween stuff on Wednesday, a scavenger hunt at the local museum, followed by dinner and trunk-or-treating at church. And, for the first time in years, Brian and I also dressed up! (I think last time we wore costumes Will was a baby.) This was mostly out of a desire on my part to not get out of my yoga pants. I thought, hmmmm, what could I dress up as that would need black pants and not require anything I don’t have already in the house? And the answer to that question was: black cat. Brian has a set of scrubs from way back when I had my c-section with Kalena so boom, easy costume there. Anyway, everyone knows the real point of the Halloween blog post is to see pictures of the kids in costume, so HERE YOU GO!

These first two are actually from Halloween. We went to a trick-or-treat thing at one of the malls here. Probably won’t do that again. It was PACKED, so lots of just waiting in line. Also, a ridiculous number of people carrying around babies to trick-or-treat. Babies in costume are adorable! Yes! Dress them up! But listen- if your kid can’t walk? THEY DON’T NEED ANY CANDY. (We did NOT pick up candy for our stroller babies. They were just there to be cute.)

We (okay *I*) forgot most of Will’s costume. I realized about halfway there. So he was just Nigel Marven, regular zoologist.

This one is from Wednesday: tuckered out little lion!

And look! Our whole family! I considered cropping this, but I kinda like having the giant T-Rex skeleton in there.

Here is, sadly, the best picture of Will’s whole costume that I got. It’s one of those costumes that looks like you’re riding on dinosaur and as soon as I brought it home he told me he wanted to be Nigel Marven. Nigel Marven is a zoologist, and acts as a “time traveling zoologist” on Will’s very favorite show “Chased By Dinosaurs.” So he was Nigel Marven riding a dinosaur. (Except on Halloween when he was just Nigel Marven.) Anyway. Kalena, as you can see, was Glinda again. And she was OH SO PLEASED that people here recognized her as Glinda. Last year everyone thought she was a princess or a fairy and she was quite disappointed. 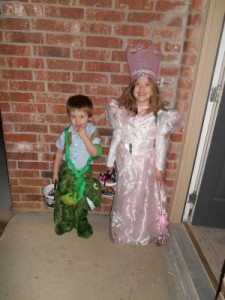