Last year for Halloween Lydia & Daniel wore their costumes for approximately 6 minutes, so this year (even though I thought of some CUTE STUFF) I opted not to buy them new costumes. This worked well because in the end we took them to zero events. Daniel had a Halloween party at school so he wore the Yoda costume from last year. (Lydia wore it last year. Not the point.)

Kalena & Will discussed about a million costumes each, but in the end Kalena was a witch and Will was Pikachu. By the time they decided it was too late to order a Pikachu costume but I thought- no worries, I’ll buy the Pikachu sweatshirt I’ve seen at Target, & find some yellow sweatpants to go with. You know what nobody sells? Yellow sweatpants. I *did* find some online. They would have arrived in time for Thanksgiving! So I busted out my super awesome sewing skills (if by super awesome I mean barely passable) and made Will some yellow fleece pants. (I was very impressed with myself. I told Brian he was not impressed enough.) 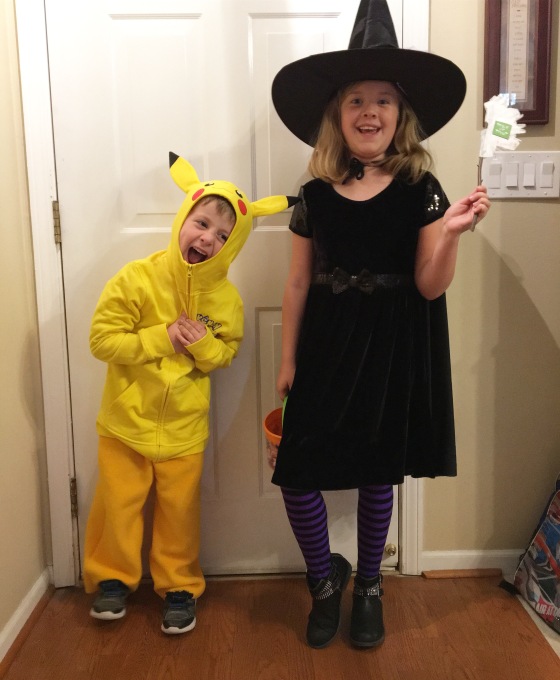 Brian took them to our church Halloween party, and his work Halloween party, and, of course, trick or treating. (All on different days. We aren’t crazy.) During all those events I kept the babies home so they could sleep. Better all around! Also I WAY over purchased candy. We had about 20 trick or treaters & about 300 pieces of candy. My mouth is happy. My pants are not.