A while back we switched up the kids rooms so that Daniel & Lydia are sharing a room. Now, Daniel goes to bed at 6 and Lydia does not, and this worked out REALLY WELL for about 3 days. We could take Lydia in, tell her she had to be quiet because Daniel was sleeping, and she would! But seriously, only like 3 days. Then she started crying when we put her down. Crying loud enough to wake Daniel, who would then growl at her, causing her to cry more. SUPER FUN CYCLE. This led to us going to get her when she started crying. Of course, that’s what she WANTED, so it was a pretty terrible solution. So in order to not reward the tantrums, we started getting DANIEL out when Lydia started crying. Then she could just cry and not bother him. However, Lydia just gets more and more worked up when she cries, so that was also pretty disasterous.

ANYWAY. After many miserable nights of just letting her stay up until all hours, we came up with a new plan. First, shorted naps. We tried no naps, but then she’s a meltdown-mess by about 4 pm. Second, we bumped her bedtime back by like an hour and a half. Third, instead of trying to get her down quietly in a room where Daniel is asleep, now we move Daniel down to the guest bed in the playroom when it’s time for Lydia to go to bed. And then there’s lots of singing, and laying with her, and trying to leave by telling her I’ll be right back, and buying her one of those music-playing light-up stuffed animals. And sometimes it’s STILL a disaster, but at least not every day. Sad how low the bar is set anymore.

Today I was letting her skip nap since last night was a mess, but clearly that backfired. 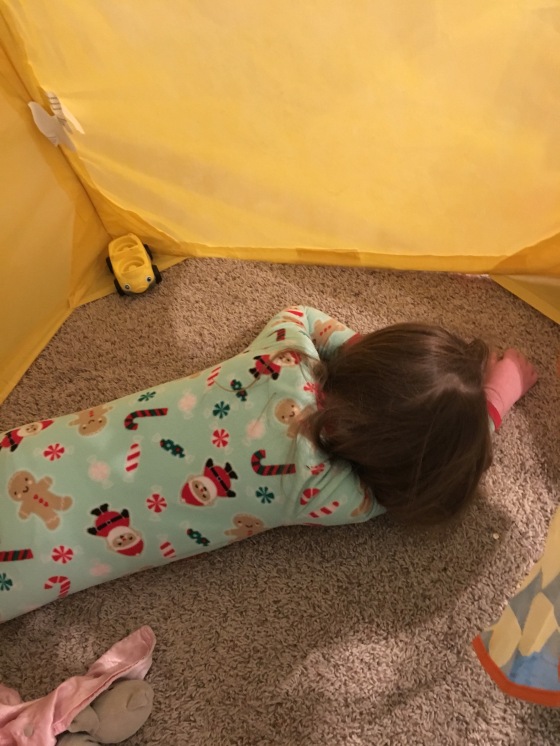